The Post of Serbia services and work procedures were expanding, but its server and storage infrastructure were not keeping pace. By moving to a virtualized environment and consolidating its server and storage infrastructure, the client gained significant business efficiencies. In addition, they prepared a foundation for introducing disaster recovery and business continuity procedures into the organization.

The Post of Serbia was starting to outgrow its current IT infrastructure, which resulted in inefficient work procedures and inadequate use of existing resources. The client had a mixed server infrastructure (more than 100 servers) consisting of physical servers, as well as additional server infrastructure for their Enterprise Resource Planning (ERP) solution (based on IBM Power servers 5th generation). To modernize its information system and meet the prerequisites for business continuity and disaster recovery, the Post of Serbia had to migrate its existing infrastructure to new equipment. As part of the solution, the client wanted to have two data canters with databases in two separate locations. In addition, it was necessary to complete the migration of the entire ERP infrastructure and additional databases with minimal disruptions to users.

“The realization of this project represents a significant step forward in enhancing data protection and increasing the overall availability of the Post of Serbia’s information system. Virtualization enables us to quickly and easily prepare our server environment for future projects, thus shortening the time it takes to implement new business services. Comtrade System Integration has completed the entire project meticulously and efficiently, meeting the expected deadlines and delivering comprehensive, high-quality training materials.”

Managing Director of the Sector for System Software and Exploitation 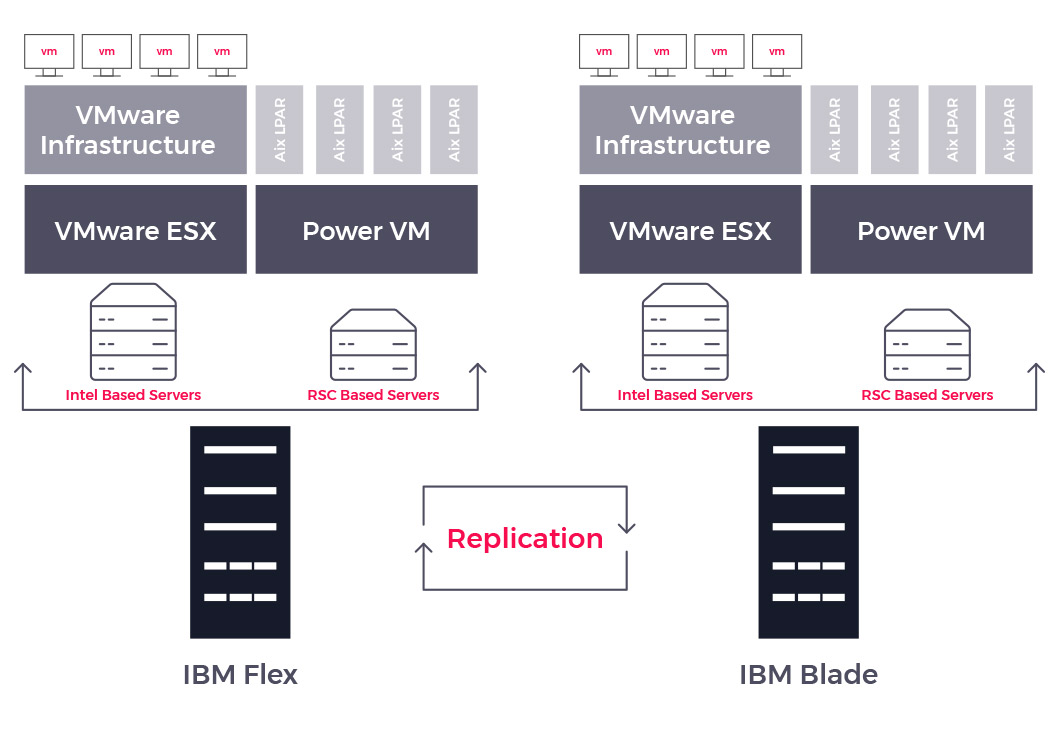 The project was carried out in three phases:

Phase 1: The first phase included migration of the existing IT infrastructure to the new equipment, IBM BladeCenter. This allowed us to mix servers with CISC and RICS technology with a single Blade chassis in order to consolidate infrastructure. By using virtualization of the 7th generation of Power processor within IBM Blade servers PS 702, we were able to migrate the entire ERP infrastructure and additional databases with very little interruptions to users. For the storage subsystem, we implemented IBM Storwize V7000, which enabled transparent data migration from the existing IBM DS8100 and synchrnous/ asynchronous connection of storage subsystems with a remote location. The existing server with IBM Tivoli Storage Manager for backup software was moved to offline mode using the advanced features of AIX operational systems. A large number of newly formed LPAR that worked through NVIP technology „Boot from SAN” demanded creation of specific scripts for easy administration of SAN infrastructure.

Phase 2: The second phase involved the installation of new equipment (IBM Flex) in the primary data center and relocating existing equipment (IBM Blade) to a remote location. It also involved establishing mechanisms for communication independent of the existing LAN infrastructure.

As the basis of infrastructure consolidation and integration, we chose IBM PureFlex technology, which included the following:

The client set up a physical connection between the primary and secondary data centers using DWDM devices to test the new equipment. The testing included “live partition mobility”, testing for LPAR and live migration for Vmware virtual machines for the remote location. After the testing was successfully completed at the primary location, the equipment was then moved to the remote data center. The challenges that we faced in the second phase included transparent migration of the existing servers to the new equipment and establishing connections between the two data center locations via DWDM devices.

Phase 3: The virtual sever infrastructure that was implemented enabled the support of a far greater number of services. However, the inadequate speed and space on storage subsystems were causing a bottleneck. To resolve this challenge, the system was augmented with additional disk space at both on premise and off premise locations. Additionally, we installed IBM Flash System 810, an all-flash storage subsystem that is used as a tiered LUNs for the primary storage subsystems.

By implementing an advanced virtualization solution and consolidating its server and storage infrastructure, the Post of Serbia gained significant benefits both from the IT and business perspective. The client also reduced energy consumption and cut down on monthly energy costs through virtualization and optimization of resource utilization

Instead of 100 servers, the client is now using 4+2 servers at the primary data center and new servers in the secondary data center. The electricity consumption from servers and cooling of the server room has been decreased by more than 50 per cent. Furthermore, the solution enabled the Post of Serbia to simplify administrative processes and improve the level of customer service as demonstrated by the 50 per cent reduction in the transaction processing time at the post office counter. Finally, the client now has a solid foundation for crating business continuity and disaster recovery procedures.

The Post of Serbia is the national postal service of Serbia with its headquarters based in Belgrade. Its infrastructure and logistics network consist of more than 1,500 post offices, 3 main sorting centers, 17 postal centers and over 3,600 delivery areas. The Post of Serbia offers a number of electronic and physical delivery services, including letter post, parcel services, express mail, electronic money orders, freight, forwarding and third party logistics. In addition, thePost of Serbia also provides IT services, including Posta Net, the largest national Internet service provider and CePP (Center for PPTT e-business).