Unstandardized business taxonomy and multiple data sources made it difficult for Telekom to access enterprise data, analyze it and generate timely reports. Comtrade System Integration implemented an advanced data warehouse solution for business intelligence and analytics and helped the client get the most value out of their data.

Telekom’s IT department was under constant pressure to provide timely information in a complex enterprise environment. The client’s IT team had difficulty preparing reports due to lack of unified business taxonomy across the organization, as well as numerous underlying applications and data sources involved.

To enable unified and timely reporting from separate applications and data sources, a central repository (data warehouse) had to be implemented. To ensure alignment with telco operations and provide robustness for future requirements, a standardized telecommunications data model for data warehouse had to be used. In addition, due to lack of modern report modelling and designer platform, business intelligence tools had to be introduced.

The solution had to meet the following requirements: 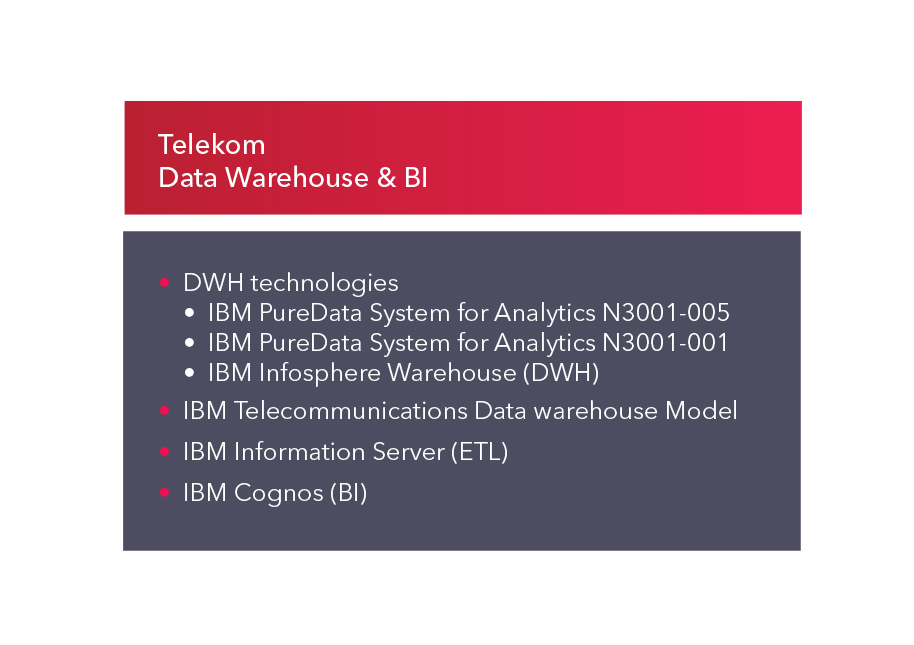 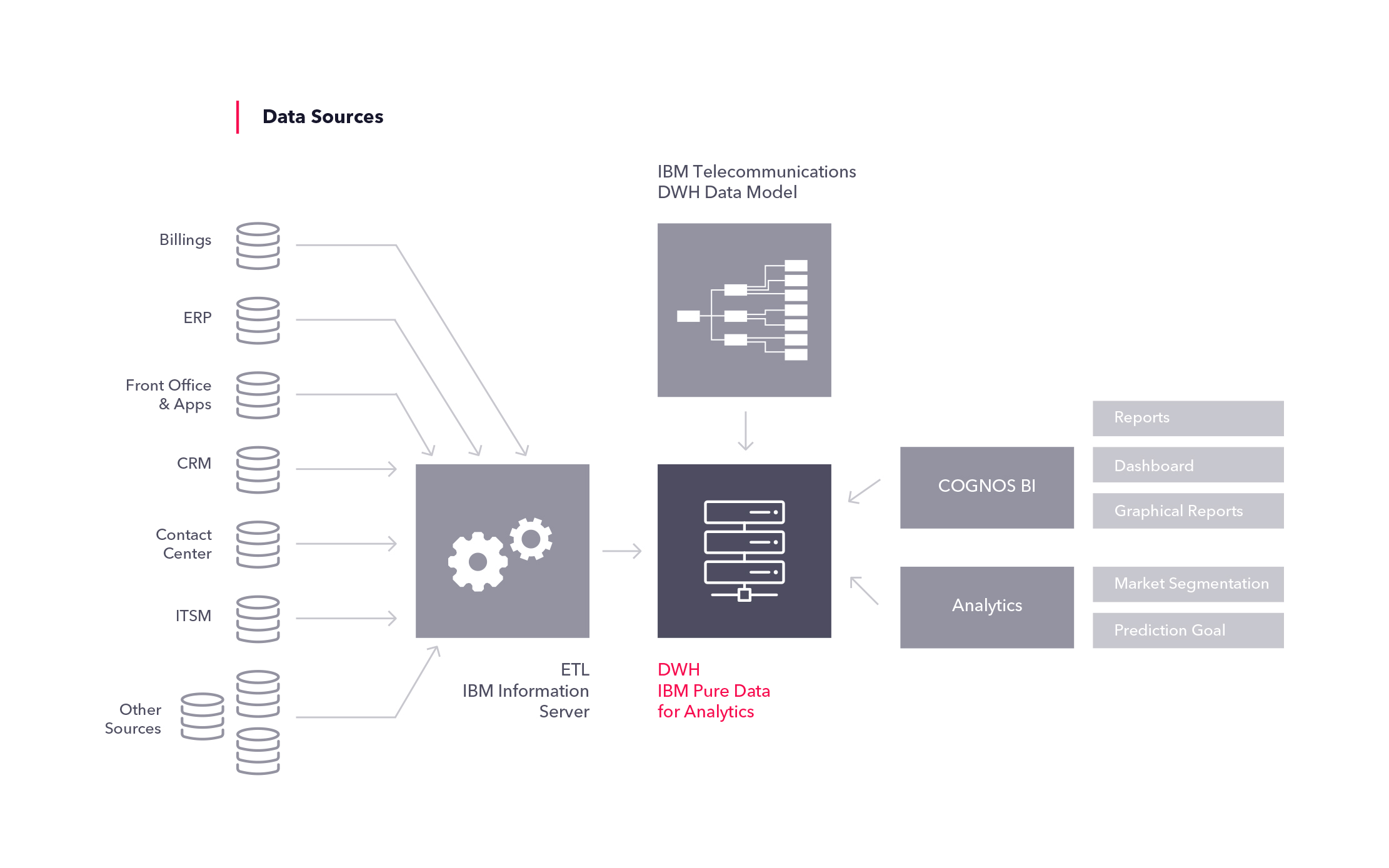 Comtrade SI used IBM technologies to implement an enterprise data warehouse solution based on a standardized telecommunication model as the core for all reporting requirements and future analytics efforts.

The IBM telecommunications DWH model was used as a blueprint for the DWH that had to be built for the client. The first step was to customize the blueprint according to Telekom’s specific business processes and requirements. At the same time, in close cooperation with the Telekom team, Comtrade SI preformed data source and business requirement analysis.

An important stage of the project involved highly complex mappings between sources and target data warehouse model. Comtrade SI used its expertise to ensure this step is performed with complete accuracy to avoid possible errors or misinterpretations of source system fields or business logic as this could lead to a huge amount of rework in the development phase.

The development was done using IBM Information Datastage ETL tool which is known for its high ability to process data in parallel and hence achieve a shorter timeframe for data load. After a successful migration of data into DWH, the first Business Intelligence reports were launched in Cognos BI and were ready for use by employees.

Data warehouse implementation in line with TM Forum standards resulted in unified view on business information and speed up report delivery cycle. Consequently, analytics based on integrated data help us to better know our customers and to improve communication and customer experience. This is now a foundation for all our future big data initiatives.

IT Planning and Development Director

The DWH solution helped Telekom achieve a single view of their data, which was previously spread across multiple locations. The company now has business intelligence and analytics that help them use data in new ways. The solution delivered a unified and standardized data repository that holds all business information, which is updated daily and constantly available for analyzing and planning purposes. Instead of having data segregated across different databases and systems that use different taxonomy and language, Comtrade SI helped Telekom achieve a consolidated view of its enterprise data and ensure its availability where and when it’s needed.

In addition, new channels of information have been introduced (web and mobile). This helped to significantly reduce costs as there is less manual work involved for report preparation, as well as less printing costs. Telekom also achieved a more efficient and exhaustive campaign management and analytics thanks to a unified data warehouse. Finally, the complicated process of preparing reports has been drastically improved. Now, reports are generated a lot faster and with greater ease.

Telekom Serbia is a locally-owned telecommunications company founded in 1997 and headquartered in Belgrade. For the past 18 years, Telekom has been a leader in fixed and mobile telephony in the region. The company offers a range of fixed-line, mobile and Internet communications to customers in Serbia, Montenegro and Bosnia and Herzegovina.